Curse of Denial - Coming For Your Soul

by Curse of Denial 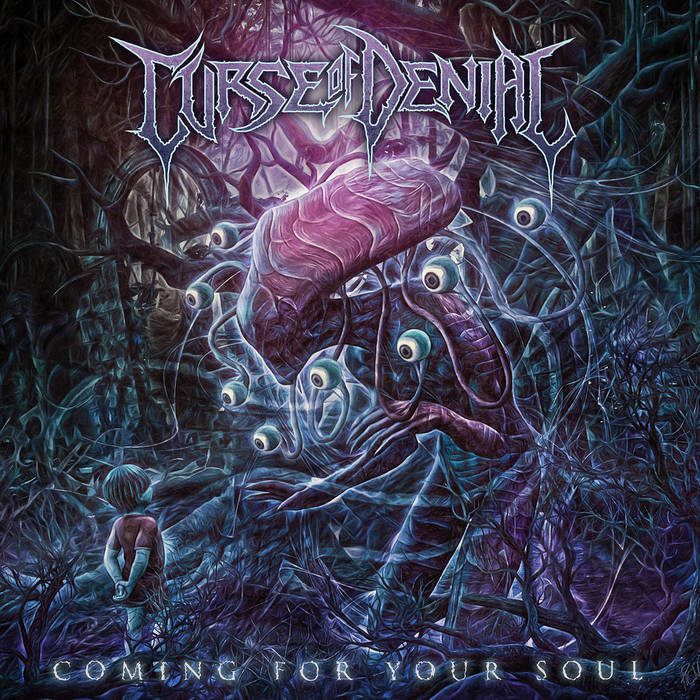 Fraz Excellent blackened death metal with some old school thrash vibes coming through. Production is on point, song structure is satisfyingly unique and there are some decent solos to crystallise the greatness. Favorite track: The Headless Horseman.

Nekobibu It's catchy, it's nasty, it's melodic, it's aggressive, it's dynamic, it's great!
They could have made two albums with this one and I would have bought both of them.

Dementicus Well this just blew me the fuck away. Excellently played, headbanging, heavy as hell extreme metal that manages to stay fresh and interesting. Throughout the violence this one surprises with great musicality, diversity in moods and a production that makes everything sound booming and alive. This is how it's done people.

TheKenWord2017 Solid riffs combine with a thrashy attitude and just enough melody to keep things moving at an energetic pace for over an hour. Big bang for the buck!

"These riffs are evil and addictive and seething with Black/Death rage. This Ohio band features ex-members of Descend (of the infamous underground All That is Evil / Descend Split), From the Depths, and with Rob Molzan of death metal legends Decrepit on vocals. You can feel the hatred oozing off these songs, and I just want to bathe in it! "
- CVLT NATION
www.cvltnation.com/listen-to-the-black-death-of-curse-of-denial-coming-for-your-soul/

"Born from the abysmal rusty shackles of Cleveland, Curse of Denial take an especially pummeling approach to their unique blend of grinding death and black metal, combining the most savage, voracious elements from each into a razor-sharp vortex of hyper-calculated brutality. Equipped with an edge of deft technicality, they embellish the primordial, often simplistic character of blackened death metal with a healthy dose of cerebral musicianship.
- Invisible Oranges
www.invisibleoranges.com/umr-72119-72719/

"What they’ve created on the new album doesn’t conform to any one genre. Instead, they’ve freely pulled from elements of thrash, death and black metal, and classic heavy metal traditions in ways that suit their songcraft — and the result is an album that provides a changing experience across its 12 tracks."
- NO CLEAN SINGING
www.nocleansinging.com/2019/07/03/an-ncs-premiere-curse-of-denial-to-carry-my-sins/

"Overall, this is a fantastic release, and I find it difficult to find a flaw...
- Metal Temple 9/10
www.metal-temple.com/site/catalogues/entry/reviews/cd_3/c_2/curse-of-denial.htm

"Let darkness reign across the world and those who want peace from the suffering have none. So says Curse of Denial as they wield weapons of brutality and savagery. They’re Coming For Your Soul and across 11 tracks of disgust-fuelled blackened death metal, few will be able to not give in to their demands. Sickeningly heavy, we have here an album that is everything you could want from extreme music but handled with a deft touch. One of a band that knows just how to deliver its sermon so those experiencing it either don’t flee the room or fall asleep."
- Games, Brrraaains & A Head-Banging Life
www.gbhbl.com/album-review-curse-of-denial-coming-for-your-soul-redefining-darkness-records/

"Very versatile, with technical touches that make us walk through a gallery of various nuances; although maintaining the bases of Black / Death Metal, but this time with a twist as far as interpretation is concerned. Overcoming their debut work "The 13th sign" seemed difficult but they have achieved it based on fusion and inventive freedom."
- Necromance Magazine
necromance.eu/curse-of-denial-usa-coming-for-your-soul-cd-2019-redefining-darkness-records/

"With the entire line-up in tact from their debut, the band are maturing into a formative beast. The heavy moments are heavier, the melodic bits more refined, and while at times they lean toward technical, the band never get carried away and keep the focus in the songwriting. Rob Molzan’s (Decrepit) Ross Dolan, like delivery never ceases to amaze and the stories he weaves are always captivating."
- Permafrost Today
permafrost.today/2019/07/16/curse-of-denial-matured-into-a-formative-beast/

"A giant of infernal fire awaits with the second complete album of Curse of Denial , entitled Coming For Your Soul , which takes the metal flag to battle to level and annihilate the false. Combining the spirit of the infamous past of northeastern Ohio, evil incarnate is engendered to destroy a new generation. Introduces former members of Decrepit, From the Depths, and Descend (RIP Jim Konya)"
- RTMB Magazine
www.rtmbmusic.com/reviews/3280/curse-of-denial

"..the quintet skillfully mixes Autopsy-like monotony with frantic guitar runs, Doom-y passages a'la Nailed to Obscurity and sometimes you can even hear the love for Black Metal in song....From the variety heard within, I would even go so far as to claim that Sulfur Aeon have a worthy competitor at their heels..."
- Zephyrs Odem
www.zephyrs-odem.de/cd-s/detail/curse-of-denial-coming-for-your-soul-2019-9429/#.XTpxqS3Mx24

From the depths of Cleveland's legendary metal scene emerges Curse of Denial to devour the innards of the weak and unsuspecting. Vicious old school thrash-inspired Blackened Death Metal carnage that will keep your head steadily banging into utter oblivion. A juggernaut of hellfire awaits with Curse of Denial's 2nd full length album that carries the banner of metal into battle to level and annihilate the false. Conjuring the spirit of Northeast Ohio's infamous past, evil incarnate is spawned to destroy a new generation. Features ex-members of Decrepit, From the Depths, and Descend (RIP Jim Konya).

All Lyrics by Molzan except Tracks 4 & 8 (Perez)

Bandcamp Daily  your guide to the world of Bandcamp

Cannibal Corpse's George "Corpsegrinder" Fisher stops by for an interview